In an unprecedented ruling of a federal court in teh United States it was stated that Rachel Maddow, anchor of MSNBC is propagating fake news and that everybody knows this. Well, of course, everybody with two brain cells on active duty (as David Icke calls it) knows that Maddow is simply a propaganda tool, but it is always nice to see one's knowledge confirmed in a court.

Rachel Maddow's show can be seen as the archetype of a mainstream 'news' outlet. Where opinions are presented as facts. Sources are never revealed, ("our sources say ....", etc.), non-representative opinions then constructed to form an 'image', which then passes off as news. The media are littered with this kind of channels.


The extreme cold continues to sweep across Europe. For a couple of days some heat crept into the continent, but this was rapidly replaced by a new cold wave. While summer has already started (Astronomical summer at 21st of June, meteorological summer at 1st of June), we get this:

Maybe the reason why China (going back to science, see our Science part of this editions EN) has fully abandoned teh Global Warming politics:


So, now the problem exists that the biggest economy has come to its senses. Are we going to follow? Remember the classic work The Tragedy of the Commons of William Loyd and later Garrett Hardin; the sustainability politics are unsustainable!
Europe and The United States are just digging themselves a communist grave. Which is ironic, since Marx wrote his famous words at the end of the book Manifest "What the bourgeoisie therefore produces, above all, are its own grave-diggers. Its fall and the victory of the proletariat are equally inevitable"
So we can conclude "What the apparatchiks therefore produce, above all, are their own grave-diggers. Their fall and the liberation of the people are equally inevitable"


As we know, President Trump was ousted by the cabal -- using all the tricks in the book -- and a puppet Biden replaced him. By his side a non-moral-fiber Kamala Harris. Well, strong words, but proven correct. One of teh strong issues of the Trump bashers was that Trump was too strong on the illegal immigrants traveling through Mexico and arriving on the border of teh United States.
Now compare Kamala Harris before the elections and when she is in power. She is just using whatever rhetoric to sway people. Whatever it takes to get into power. No moral fiber whatsoever.


Teh question EN asks is: Why do none of teh Trump bashers now start bashing Harris? Would it be because they have no brain cells on active duty and simply don't do it because they were not instructed to do so by the regime?

We have to conclude. Trump was right!


The system is getting so absurdly marxist, that an exile from North Korea observed "Not even North Korea was this nuts":

This week we show you information that the inventor of teh vacccine technology, Dr. Robert Malone, says that the CoFlu19 vaccine is not safe:


That is quite remarkable. Let's give you a summary. (They tell us to listen to 'science', so here are some top scientist speaking):

An example of the latter is the comparison between CoFlu19 cases in The Netherlands (severe measures) and Sweden (light measures). Ourworldindata presents these facts:

But it gets worse. Latest news is that the vaccine does not work. That is to say, the ARR (absolute risk reduction) of the vaccines is less than a percent. To put it in another way, between 100 and 200 people have to be vaccinated to prevent one CoFlu19 case. One might as well say that the vaccine is utterly useless. Here the comment in The Lancet mentioning this:


The entire CoFLu19 story starts smelling worse and worse. Yet, the cover up continues. It is now likely that the virus somehow escaped from the lab in Wuhan. Further investigation has to find out if it was done on purpose or merely an accident. In any case, China will have to compensate the world for the damage it has done. It is estimated about 3.5 million people died from the virus. With about 1 million euros per life, 3.5 trillion euros will have to be paid by China. That would basically ruin the country.
That probably explains why they are trying to cover up the lab-leak scenario:


To the world leaders: You can and maintain the narrative that teh virus is super deadly and not go and punish the responsible entities. Heads must roll, or give up your CoFlu19 narrative! You cannot have your cake and eat it!

However, Klaus Schwab and teh World Economic Forum consider teh pandemic as a "great opportunity" to push through some society reforms, principaly the organization of economy, which will be more based on the central-government framework, i.e., '(soviet)-communism', or 'corporate fascism', or 'stakeholder capitalism' (the euphemism Schwab likes to use). This is well described by the following meme (author unknown):

Indeed, we are going to suffer from this 'pandemic' until we embrace the central regime of Klaus Schwab and his neo-marxist, neo-fascist cronies.


Great progress is made in the scientific area. Our world view is finally crumbling down and we start making progress again. After years of a stance "our prophet Einstein is right by definition, what part of Einstein you did not understand?!!", something that reminds us very much of the stance at the end of the 19th century, where the role of prophet was taken by Newton, who was believed to have said teh final word in science. Now breakthroughs are being made.
One consequence of Einstein's theory of relativity is the necessity of the existence of Black Holes. The black holes themselves have a philosophical problem, as they violate other laws of physics that are higher in the hierarchy. For instance the laws of Thermodynamics. Or, as Eddington wrote:


"But if your theory is found to be against the second law of thermodynamics, I can give you no hope; there is nothing for it but to collapse in deepest humiliation"


Now the funny thing of science is that the Scientific Method has an element that states that your theory must make a prediction of something that can be done in the future. Einstein did such predictions and that gave him fame. For instance the light bending of the stellar light around the Sun, observed during an eclipse. Hail o wise Einstein! (Well, another part of teh Scientific Method states that you must debunk all competing theories to explain that data, something that was never don in this case).
Fast forward 2021. Einstein's Black Holes predicted spectacular events about to occur in the center of our galaxy, at the alleged black hole at Sagittarius A*. A gas cloud was rapidly moving in on the black hole -- and even rapidly accelerating -- and it was expected to start generating spectacular radiation with ending up on accretion disks, etc.
All telescopes pointed at the gas cloud-black-hole-system. In eager anticipation of the great show of nature and to prove, once again, that the prophet Einstein was right, once again.

And then ... nothing happened. The gas cloud actually decelerating. This fully debunks the gravity-black-hole theory. Something is terrible amiss here in the theory of Einstein. See for yourself this video of See The Pattern:

The Black Hole at Sagittarius A* is Disobeying Gravity! (See The Pattern)

Or read the discussion on Glenn Swart's blog Do We Already Have The Solutions (DWAHTS): 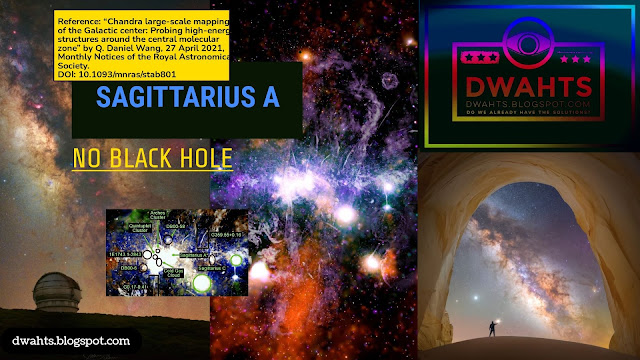 Whats up with Sagittarius A? (DWAHTS)


It seems to be the end of black-hole theory. Let me remind you again about the Scientific Method: it does not matter how many facts can be explained by your theory. There is no such thing as corroborative facts. If a single fact can debunk your theory, your theory is gone down the drain.

However, acolytes of teh prophet do not give up so easily and have come up with an ad hoc explanation. The black hole is not a black hole at all, but ... wait for it ... tada ... "a fluffy ball of darkinos".
This reminds us very much of teh Global Warming scientific nonsense. Once it was debunked, acolytes of this religion (lead by prophet Al Gore) switched gears and started calling it 'Climate Change', in order to be able to maintain their beliefs regardless of whatever fact would come in. Well, the Scientific Method says that if your theory cannot be debunked by facts, it is not science, but religion.

That is how Western (pseudo)science works. And in all academic environments one is obliged to follow the church. Never say that the ideas of teh church are wrong, if not wanting to run the risk of being excommunicated, which is called 'cancel culture' in modern society.
When Europe was living in the Dark Ages, the Arabic world kept the flame of science alive. Once again Europe (and its allies, United States, and most of the rest of teh world) is living dark ages, where science is forbidden. This time it seems that the Asians come to the rescue. 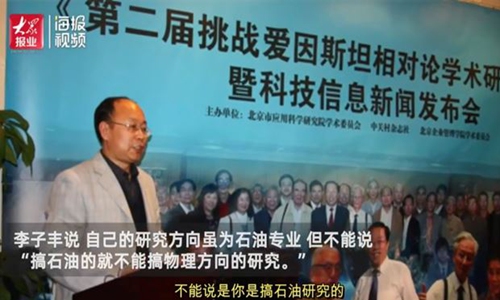 
Things seem to be finally on the move in science. EN will keep you informed.

In the meantime, Western (pseudo)science comes up with fancy theories that "aliens might start a war with humans, because we are messing up the climate of the planet". It is too ridiculous for words (Science using Ockam's Razor: aliens do not exists because there is no phenomenon in the world that needs aliens to describe it). Yet, here is teh AD science division reporting on the remarkable scientific publication:


Well, these aliens never interfered when we nuclear-bombed the planet, or when we had genocidal psychopathic regimes plaguing the planet, but now, a little bit of CO2 and, there you go, out they come from hiding. It is too farcical for words! Your taxpayer money goes to an institute that wastes it on far-fetched religious ideas, in an cunning attempt to brainwash you into thinking "EVEN THE ALIENS RECOGNIZE THE GLOBAL WARMING THREAT!!!"


We do have a wonderful Euro 2020 (or 2021, or whatever ...) football tournament going on. It is also completely obvious and clear to EN that matches with public attendance are much nicer than those without spectators. An example is Hungary where no CoFlu19 restrictions were put on the matches and the result was highly enjoyable football spectacles.